The anti Net Neutrality lobbyists apparently didn’t learn their lesson sufficiently the last time they tried to destroy the internet and devolve the entire thing into a nightmare dog-eat-dog civil war jungle. Now the latest lobbyist-in-chief at the FCC is trying to rip apart Net Neutrality, virtually guaranteeing that the entire internet will melt down into a broken TV box run by railroad barons 2.0: oligarchical super-monopolies like Comcast that will have a blank check to artificially price their competitors into bankruptcy (goodbye Netflix, Youtube, Twitch, and millions of small startups that can’t afford the new rates that Comcast and its gilded partners won’t have to pay).

Since the FCC apparently doesn’t care anymore, I did some digging and found a bunch of IP address blocks used by net neutrality opponents, and made something special just for them.

Starting today, if you’re at the US Senate, the FCC, the White House, or a Trump hotel, you will now see this instead of the normal page when you sign up for a Neocities account: 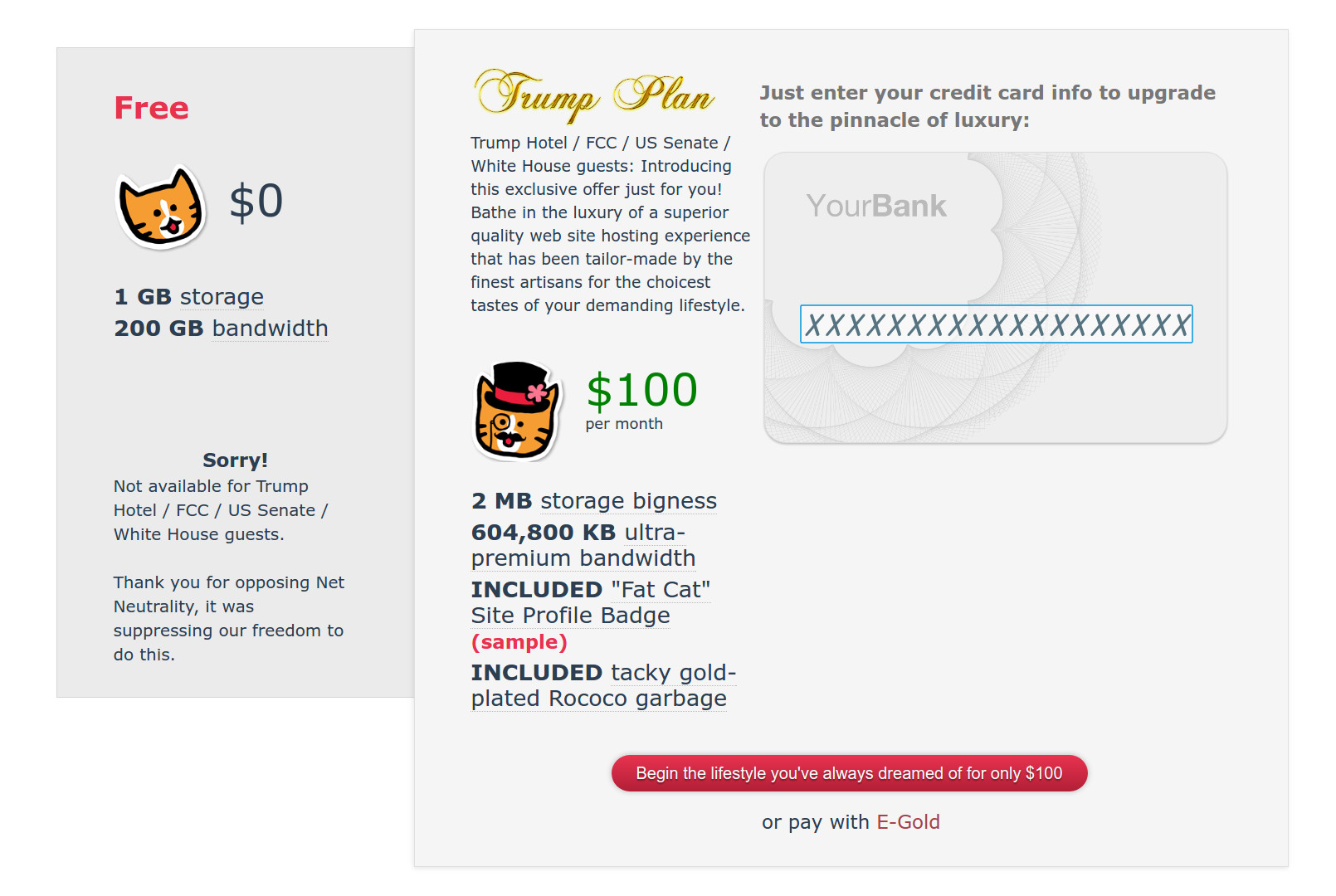 For people at US Senate, the FCC, the White House, or a Trump hotel, this is your new plan and your only option. It’s an expensive, ridiculously low-resourced option that costs $100/mo, simply because you’re using the internet from networks that are working to destroy Net Neutrality.

If you think this example of rate discrimination is scary, the reality of what’s about to happen is even scarier. Here I’m being transparent with it, allowing you to see it happen. Comcast won’t be - they’ll do it secretly in their datacenters. They’ll figure out who their competitors are for their crappy Video on Demand (VoD) service (hint: everything you know and love) and de-prioritize their traffic so it can’t reliably reach you. Or they’ll decide competitors like Netflix need to pay 10x more for peering costs than everybody else pays. Comcast’s VoD service and their partners, of course, won’t pay any of it.

Even with the weak Net Neutrality rules in place, Monopoly ISPs like Comcast already charge everybody on the internet 2-3x more for peering than it actually costs (which you ultimately pay for). As a consumer you get double taxed, from the ISP itself on one end, and from your favorite web site’s expensive bandwidth bills on the other. Gutting Net Neutrality will just give them a blank check to further gouge their customers.

We learned what happens when the railroad barons of the 19th century were allowed to do rate discrimination with monopolized utilities. Don’t let the internet go down this same dark path. Now is the time to start fighting back.

PS: If anyone outside of the IP blacklist wants to sign up for the Trump Plan for some crazy reason, it’s not a joke, it actually works. You can use this link to create a new site, or you know, this one to create a regular one.